After a pretty lack luster first quarter 2014 the real estate market in Sedona and the Verde Valley really picked up steam so that by the end of the quarter numbers of transactions was back on track to our “normal” numbers and median sales prices for a single family home jumped up to $410,000 in the Sedona area, a 9% increase over first quarter prices. 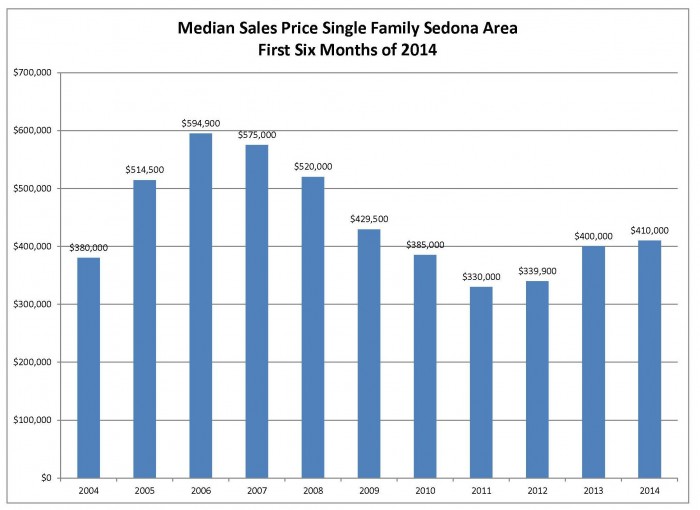 The real news for Verde Valley real estate occurred outside of the Sedona area where prices were really taking off. While the number of transactions in these areas remained steady, year over year prices and prices for the first 6 months of the year in the Cottonwood-Cornville areas, Camp Verde and Lake Montezuma/Rimrock areas are setting a blistering pace:

Increase from the bottom of the market: 61%

Increase from the bottom of the market: 69%

Increase from the bottom of the market: 41%

With the 24% increase in the median sales price in the Sedona area since the bottom of the market and rather startling increases seen in the rest of the Verde Valley over the last 6 to 12 months, the recovery is on solid footing for the Verde Valley.

The median price of a single family home rose 4% year over year in the last 12 months. The number of transactions continues to remains steady at around 400 single family sales per year as it has been for the last five years. However if the increase in transactions continues as it did in the second quarter that will change by the end of the year. Inventory dropped by 6% but that is not surprising considering the pace of sales and is still ahead by 14% from what it was at the first of the year.  Vacant land transactions for the last 12 months are up 11% over the previous 12 month period with the median sales price rising to $168,650 up 25%, making solid gains.

The luxury market, over $1,000,000, picked up the pace in the second quarter along with the rest of the market bringing the last 12 month total to 27, slightly down from the previous 12 month period.

Cumulative days on the market came in at 119 days for the last 12 months just up slightly from the previous year’s 112 days.

The median sales price for single family homes in the Rimrock and Lake Montezuma area for the last 12 months rose 32.5% to $132,500 for the largest gain in the Verde Valley, good news for homeowners in the hardest hit area of the Verde Valley.

The median sales price for single family homes in the Cottonwood and Cornville area for the last 12 months rose 24% to $180,000. Followed up by the median sales price for the first six months of the year at $199,900, a 34% increase from the first six months of 2013. The number of transactions was down slightly to 471 sales for the last 12 months but that is not deterring buyers from jumping up and paying higher prices.

I still feel like the overall real estate recovery is fragile but you cannot deny what prices have done in the Verde Valley.  Notice of Trustees sales are slowing way down and will be at pre great recession numbers for 2014 and that is reflected in the number of foreclosed properties hitting the market, providing a solid background for continuing market stability. The Feds are keeping interest rates low at bargain prices. There is still a lot of pent up demand from buyers wanting to buy and sellers wanting to sell created from the recession. Combine that with the cold winter across the Midwest and upper tier states and I think the third quarter 2014 for Verde Valley real estate will be an active one, good for both buyers and sellers.