2015 is in the book and brought few surprises in the Sedona real estate market. On the not much of a surprise side for the sixth straight year the number of sales of single family homes in the Sedona market has remained virtually unchanged, bouncing along at right around 400 sales per year. In the previous three years in spite of the number of sales being flat we had seen a significant increase in the median sales price averaging about 10% per year. However for 2015 we only saw a 2.3% increase in the median sales price from $427,500 to $437,500. We still end up with a 25% increase over the lows of 2012, better than most areas of the US.

Residential inventory has remained steady in the Sedona area, along with sales for the last three years, starting out each year in the 360 unit range and jumping up into the 420 range during the year. We did see a little bigger drop in 2016, to 347 units. I expect that we will see that come back up as we head into our spring selling season. 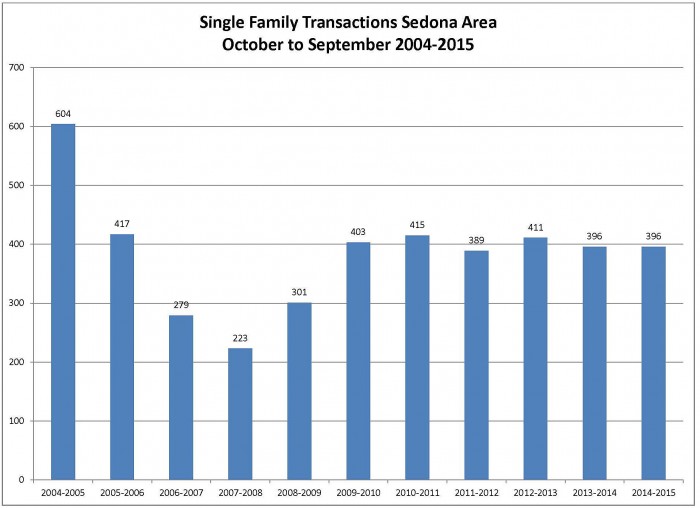 I anticipated a continued increase in vacant land prices and sales as we continued to see the median sales prices of residential properties rise. One of the impacts on land prices in the Sedona market is the continued increase in building costs and development fees, making existing homes still a bargain when compared to building a new home. For a construction cost in the $400,000 range you would be looking at an estimated $4,000 for plan review and building fee, non – utility development impact fee of $5,548 and sewer capacity fee of $9,757,  fees totaling $19,305, that is significant. 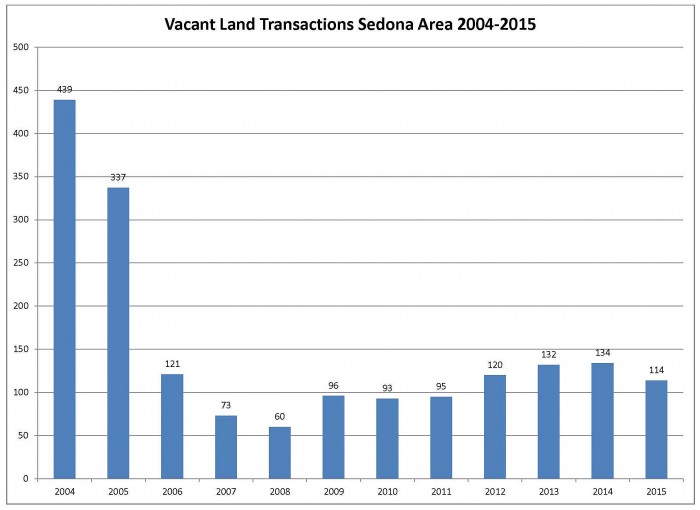 Sedona West in 2015: For Sedona West 2015 was the best year for numbers of transactions for single family homes since 2003 coming in with 21 sales. In spite of the increased number of sales the median sales price remained steady at $370,000.  Given that we saw only a 2.3 % increase in the median sales price for all of Sedona, this is pretty much in line with the rest of the Sedona market. There are only two homes currently on the market in Sedona West. No vacant land sales occurred in Sedona West in 2015 and there currently are three lots for sale. 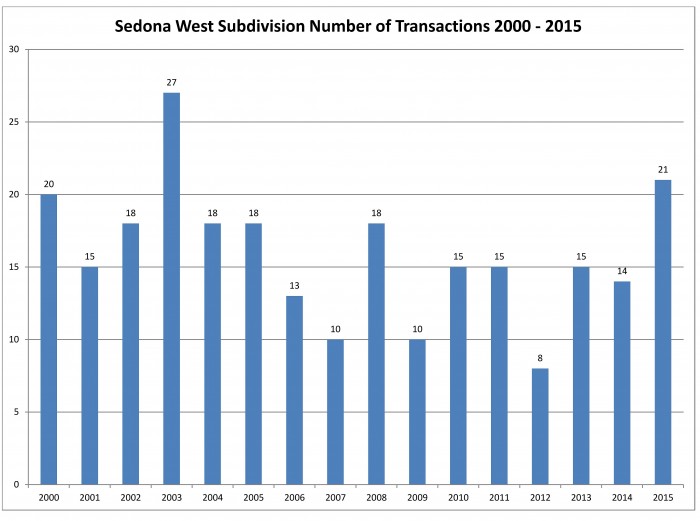 So what about the broad stoke influences on the real estate market for 2016?

Interest Rates:  Quoting some of the experts out there:

“The benchmark 30-year fixed-rate mortgage will spend the bulk of 2016 in the low 4s and remain well below the 5% mark throughout the year,” says Greg McBride, CFA, Bankrate’s chief financial analyst.

According to Corelogic: Fed will probably raise short term interest rates by one percentage point gradually over the year. This is expected to cause mortgage interest rates to rise by around a half point, to around 4.5% for the 30-year fixed rate mortgage

All in all great rates near historic lows, we need all the help we can get.

Household Formation: According to Corelogic:  “An improving labor market is expected to spur household formations in 2016, with 1.25 million new households expected. More households will spur demand for both purchases and rentals, but rentals will get the most pressure. With rental vacancies already at the lowest levels in 20 years, rents should be rising more. This could move some buyers from renting back into the market”.

More households means more buyers, more buyers should translate into more retiree sellers in California and the upper Midwest and a steady flow of buyers for Sedona and the Verde Valley.

Sales and Prices: According to Freddie Mac’s chief economist, Sean Becketti “Gradually higher mortgage interest rates will present an affordability challenge, but expect a strengthening labor market and pent-up demand to carry 2015’s home sales momentum into 2016. Expect house price growth to moderate a bit to 4.4% in 2016 driven in part by the reduction in homebuyer affordability and reduced demand as a result of Fed tightening. Housing activity will grow in 2016 despite monetary tightening. Expect total housing starts to increase 16% year-over-year and total home sales to increase 3%”

We can expect steady demand for 2016. I expect to see another year of moderate price increases although there could be stronger upward pressure if we do not see the seasonal increase in inventory.