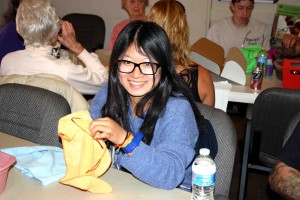 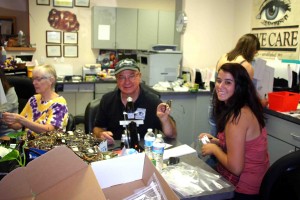 At Lion Dr. Serge Wright’s Sedona Eye Care office in Sedona, AZ,  the combined forces of 22 volunteers from the Sedona Lions, Verde Valley School and Hero  cleaned 1500 pairs of recycled glasses, most of which will go to Hero’s 2013 trip to Honduras. In addition to facilitate getting the glasses to the right individuals on the ground in Honduras, 500 pairs were read with a lensometer to determine the prescription and then individually packaged and grouped with similar prescriptions to be easily distributed in Honduras. Another 500 pairs will be read, packaged and readied for the 2013 Hero Honduras trip for a total of 1000 pairs for the Honduras trip.

The Sedona Oak Creek Canyon Lions Club and Verde Valley School’s Millennium Development goals Program had a successful eye clinic in Malawi in June of 2012. At that clinic over 400 pairs of new and recycled glasses were given to children and adults with vision problems, 25 of which were given to children learning to read by braille. 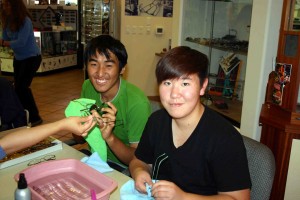 In hopes to build on the success of the 2012 clinic the two organizations  have an eye clinic planned for June 2013 and hope to distribute twice as many glasses at that clinic and in addition take another 1000 pairs of glasses to the Lions Sight First Eye clinic run by Lion Dr. Khumbo Kalua in Blantyre Malawi, to give out during the rest of the year. In order to accomplish this goal they will be having another 5 work sessions in the spring of 2013.

If you would like more information on the eye clinic, or on how to make a donation to the Verde Valley Schools MDG project or on becoming  a Lion contact Randy Crewse at crewserm@sedona.net or on his cell at 928-300-7141.